There is a Japanese card game called “karuta(かるた)”.

Among karuta, those based on Japanese classics are called “Hyakunin Isshu(百人一首,ひゃくにんいっしゅ)”.

In Japan, there is the Hyakunin Isshu competition.

Every January, there is a Hyakunin Isshu competition at a place called Omi Jingu Shrine in Shiga Prefecture.
(Perhaps you have seen this shrine if you are familiar with the famous Japanese anime “Chihayafuru.”)

How to play Hyakunin Isshu karuta?

I told you that Hyakunin Isshu is “a card game made up of Japanese poems composed by 100 different people”.
Actually, there are several ways to play with it.

The first thing to remember is that the 100 cards are divided into “Yomifuda” and “Torifuda”. 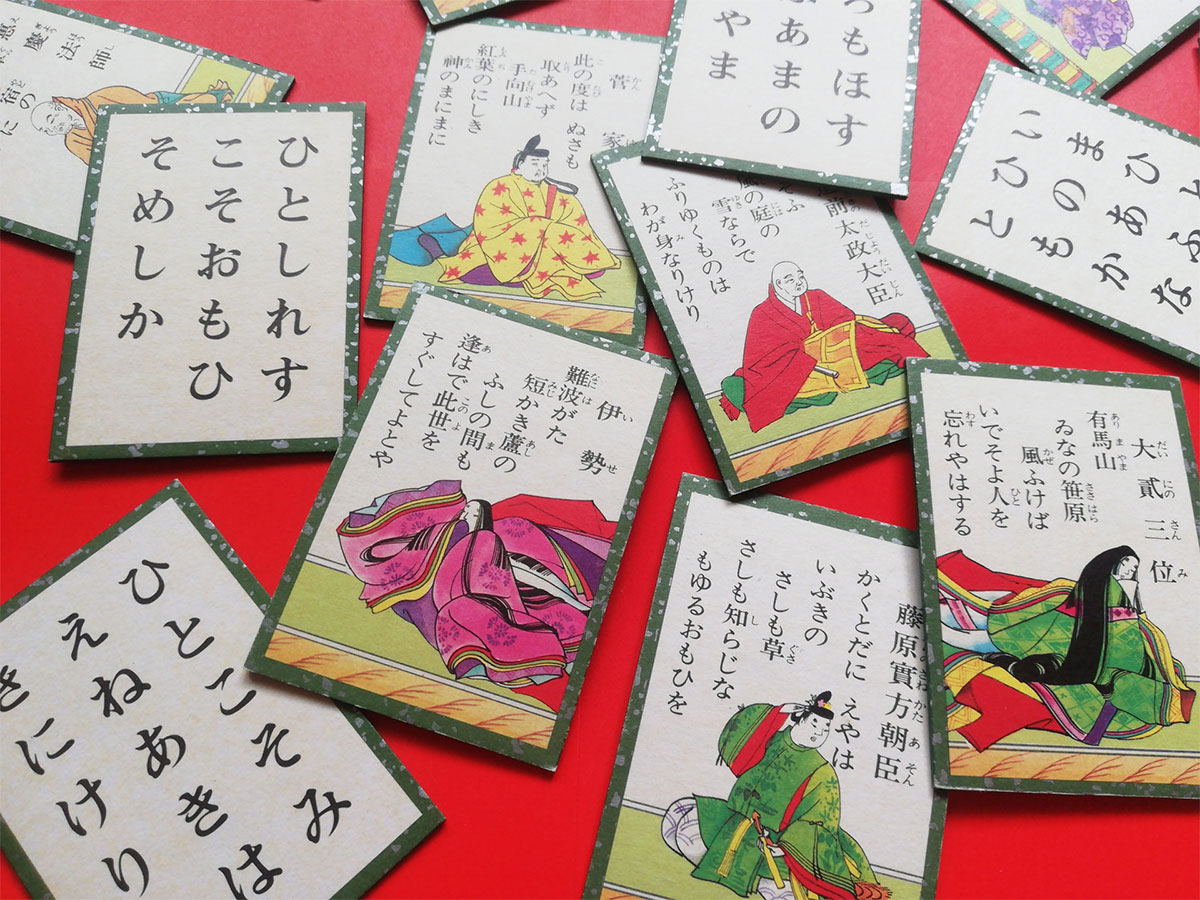 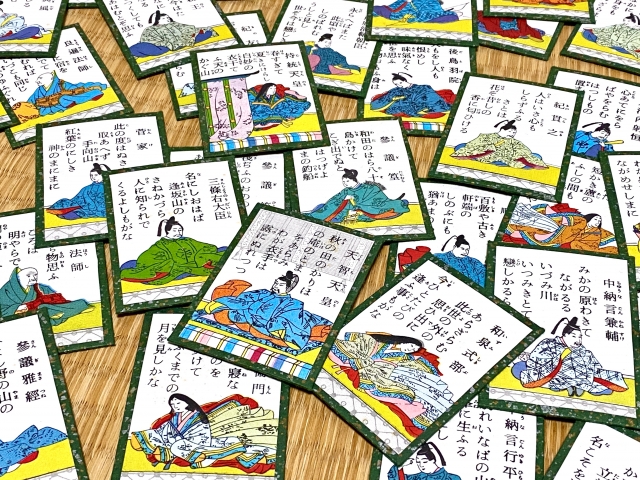 A card with a picture. It contains all the contents of the Japanese poem. 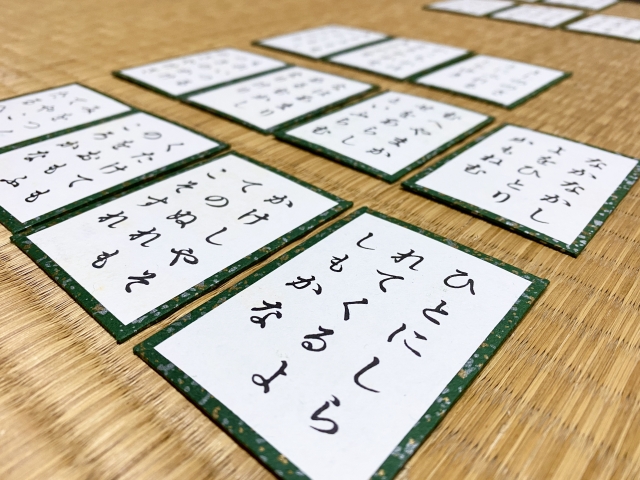 Generally, it is a card that must be taken by the participant of the game. Only the second half of the Japanese poem is written on it.

Now let’s get to know the most popular way to play!

This is the most popular way to play. 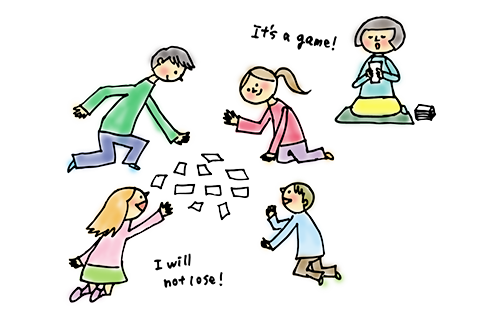 There are several other ways to play with it. Team games played in schools are called “Genpei gassen (源平合戦,げんぺいがっせん)”.

The game played at the Omi Jingu Shrine is a one-on-one battle, also known as “kyougi karuta (competitive karuta)”.

Now that I know something about the Hyakunin Isshu, I will immediately visit Omi Jingu Shrine. 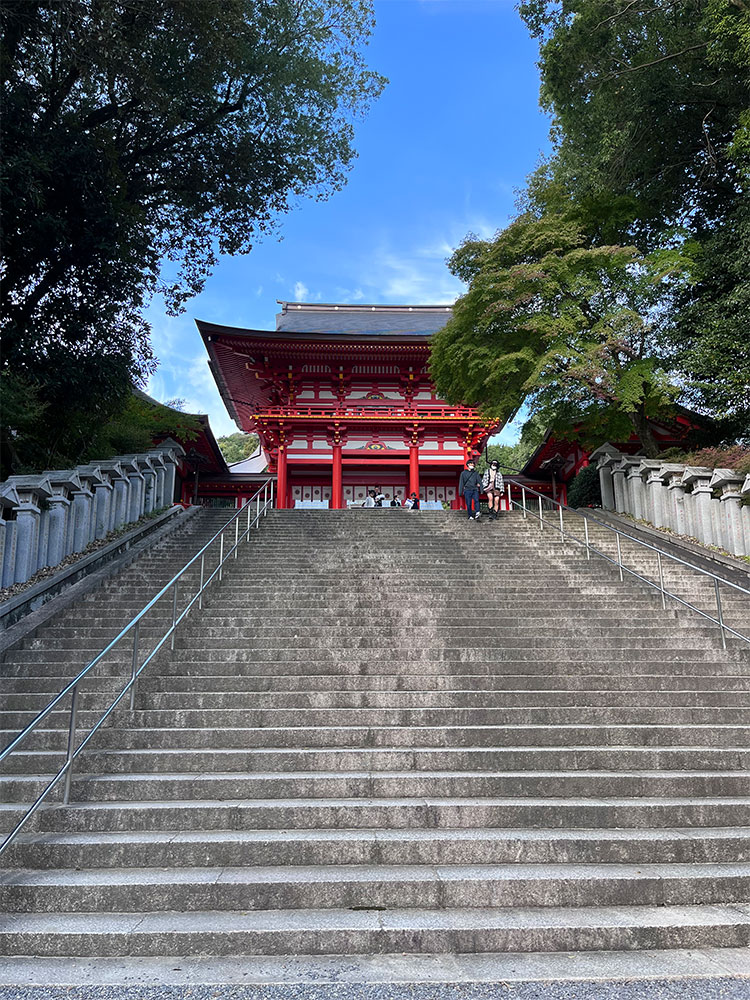 The vermilion-lacquered gate is very beautiful. It is majestic.

The reason why the Hyakunin Isshu competition came to be held at Omi Jingu Shrine has to do with the deity enshrined here.

Every year in January, a competitive karuta tournament is held here, and this Omi Jingu Shrine has become a coveted place among karuta players and lovers from all over the country. 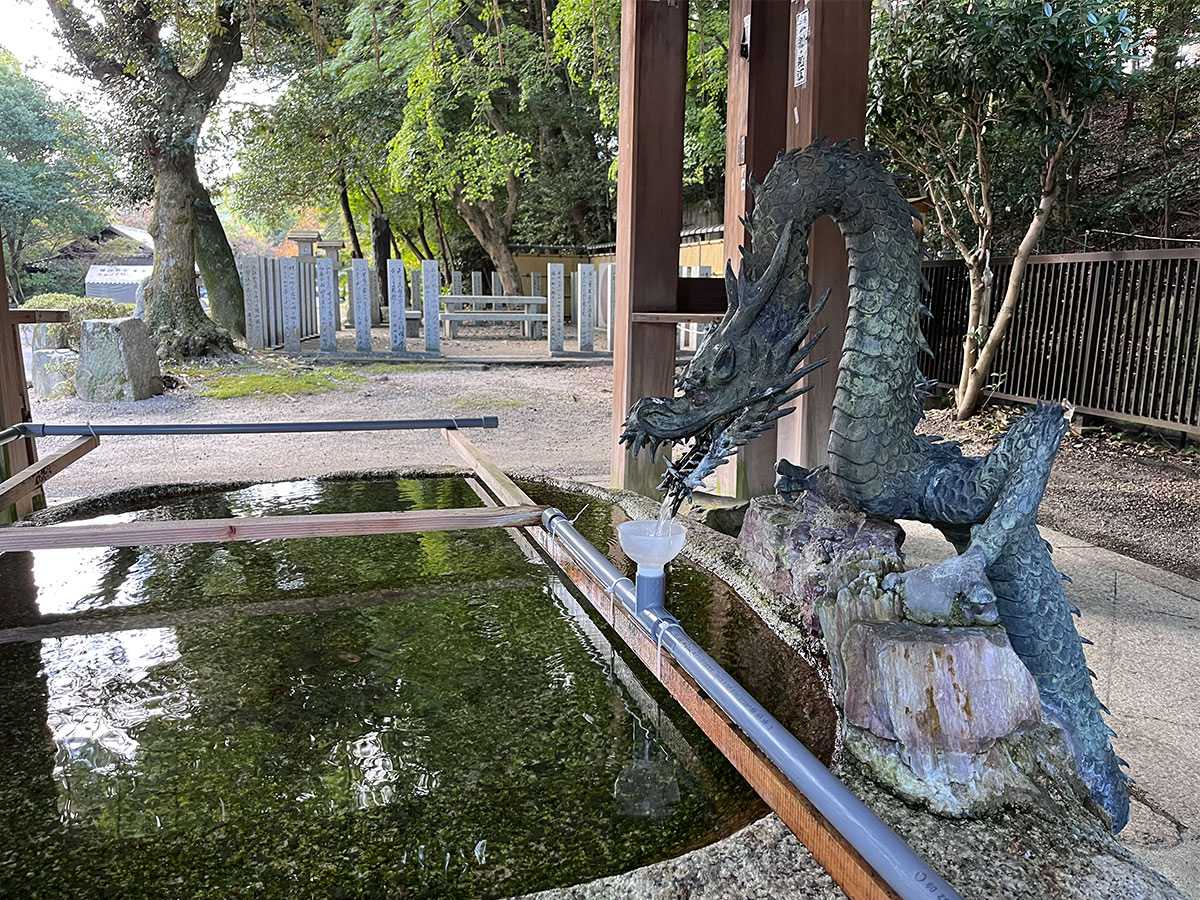 There was hand water! Let’s cleanse our hands before praying. 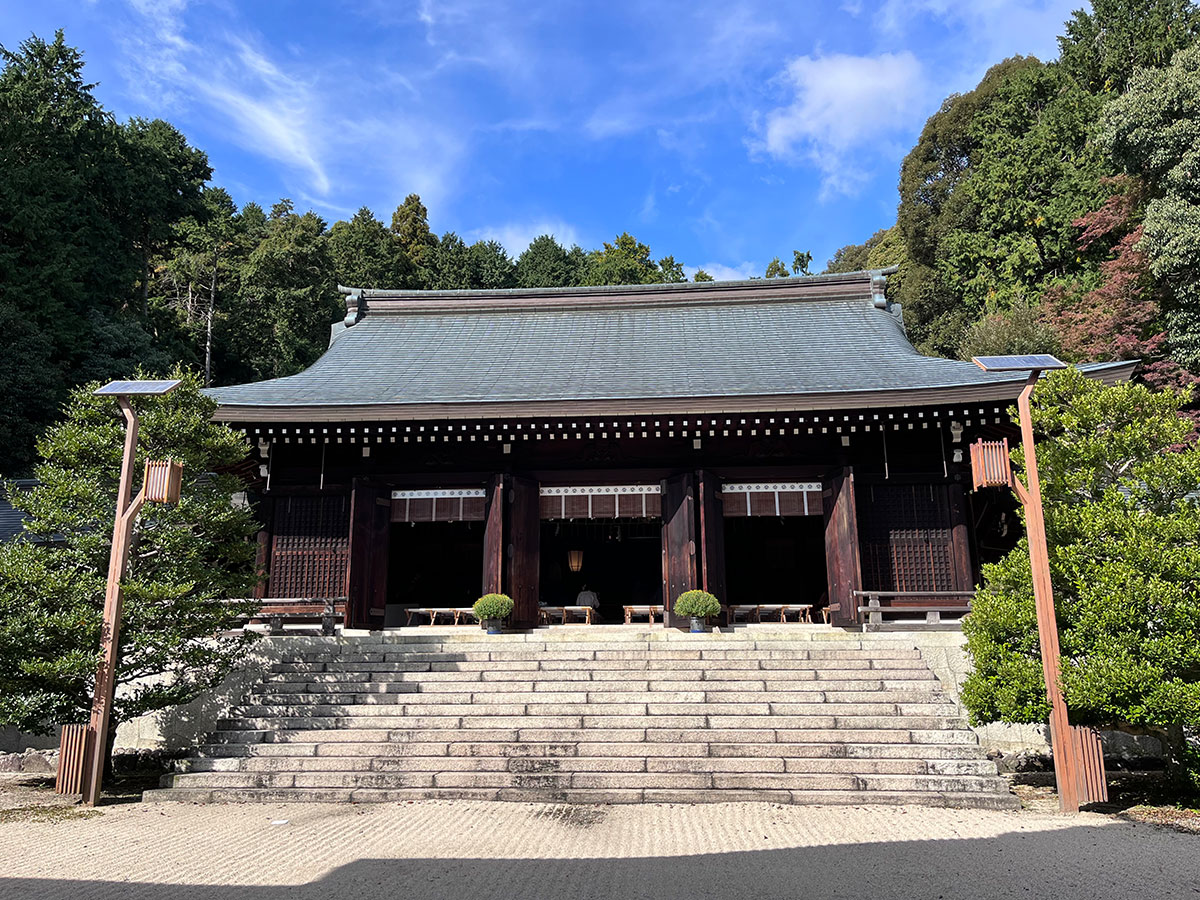 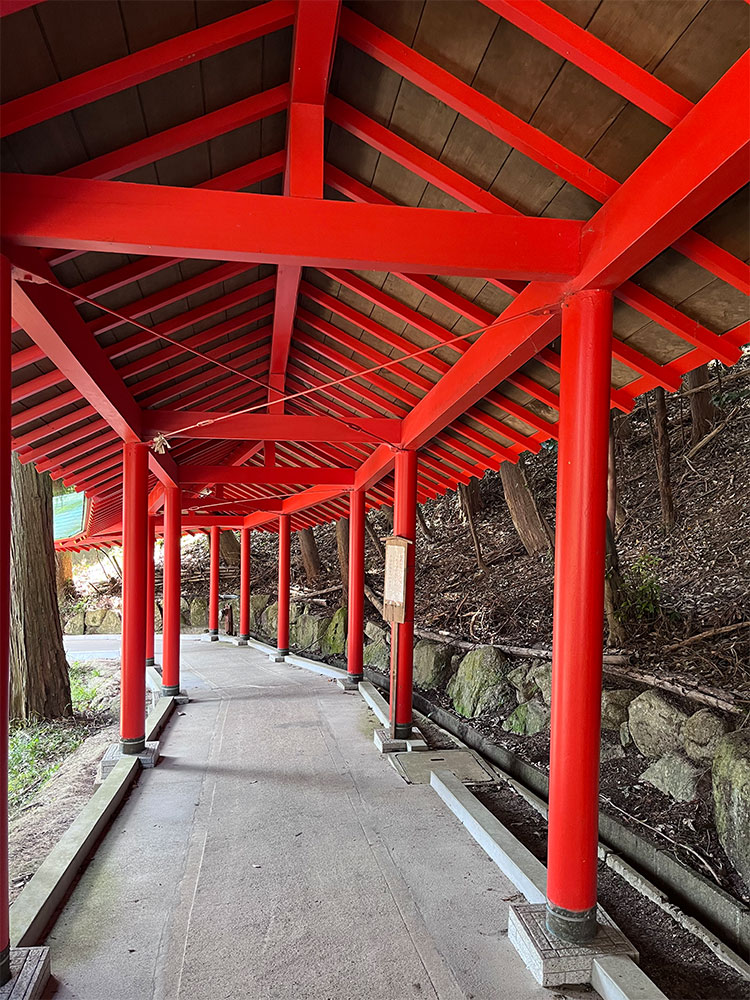 Incidentally, Emperor Tenchi once pioneered Japan’s industrial development, including the founding of the school system.

For this reason, it was revered as the “god of luck” and “god of guidance,” and became famous for its benefits related to good fortune, protection from bad luck, academics, culture, and industry. 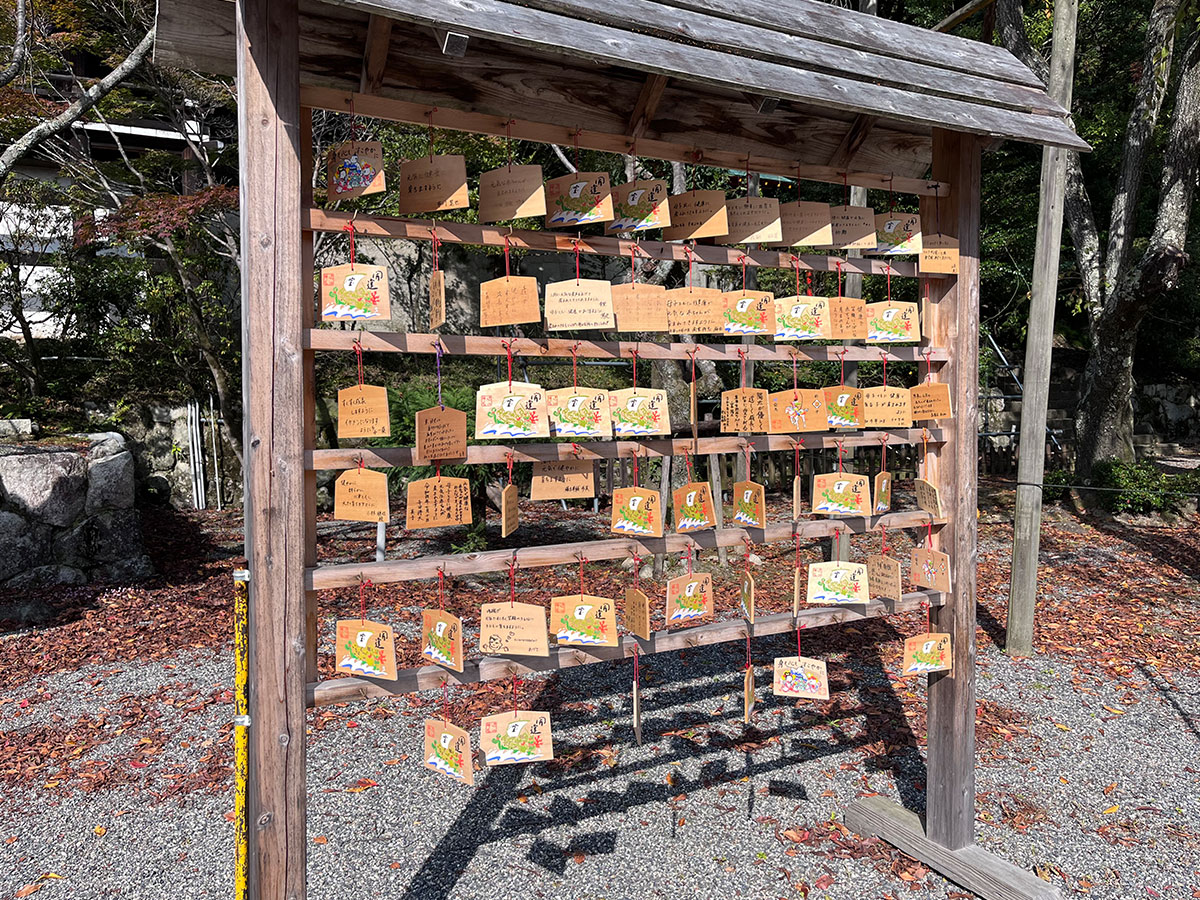 When I was there, a large Hyakunin Isshu was displayed in the rest area. 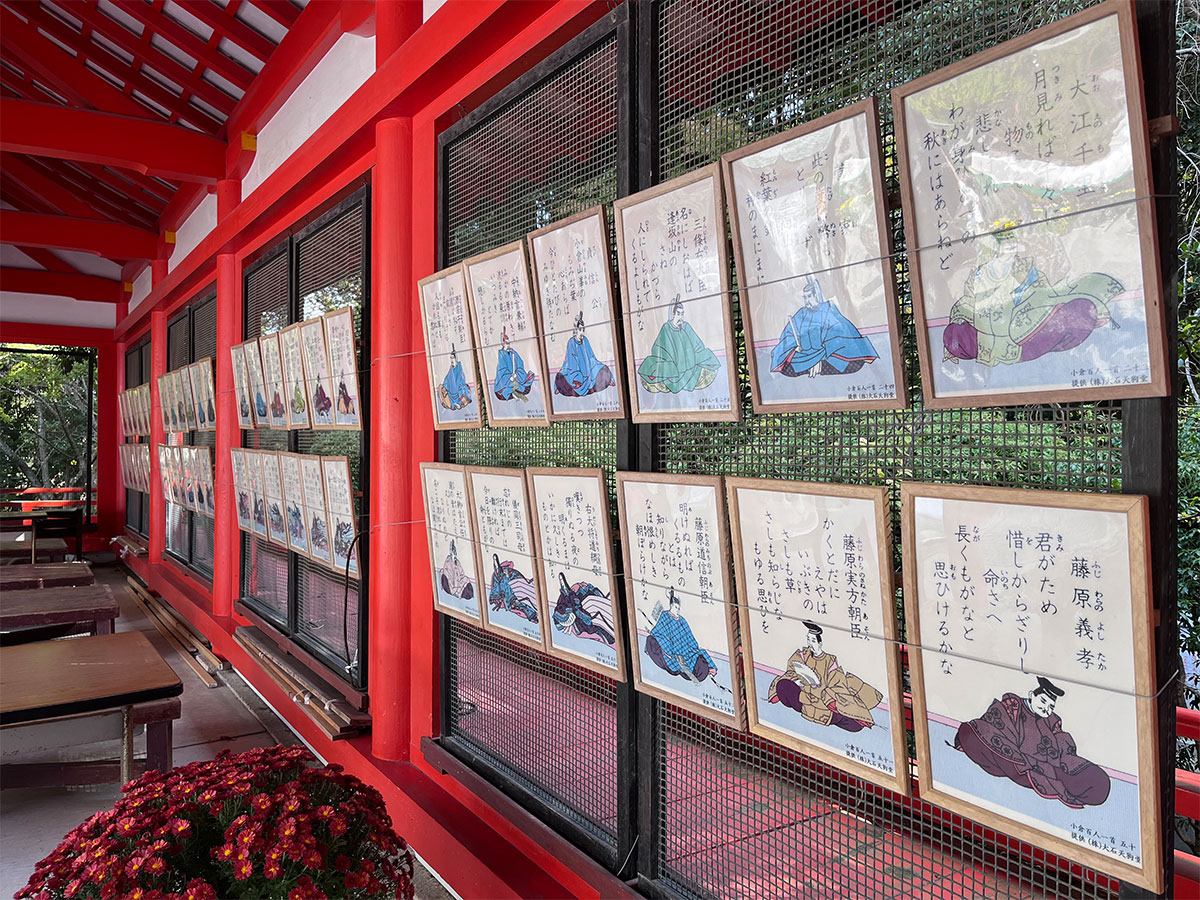 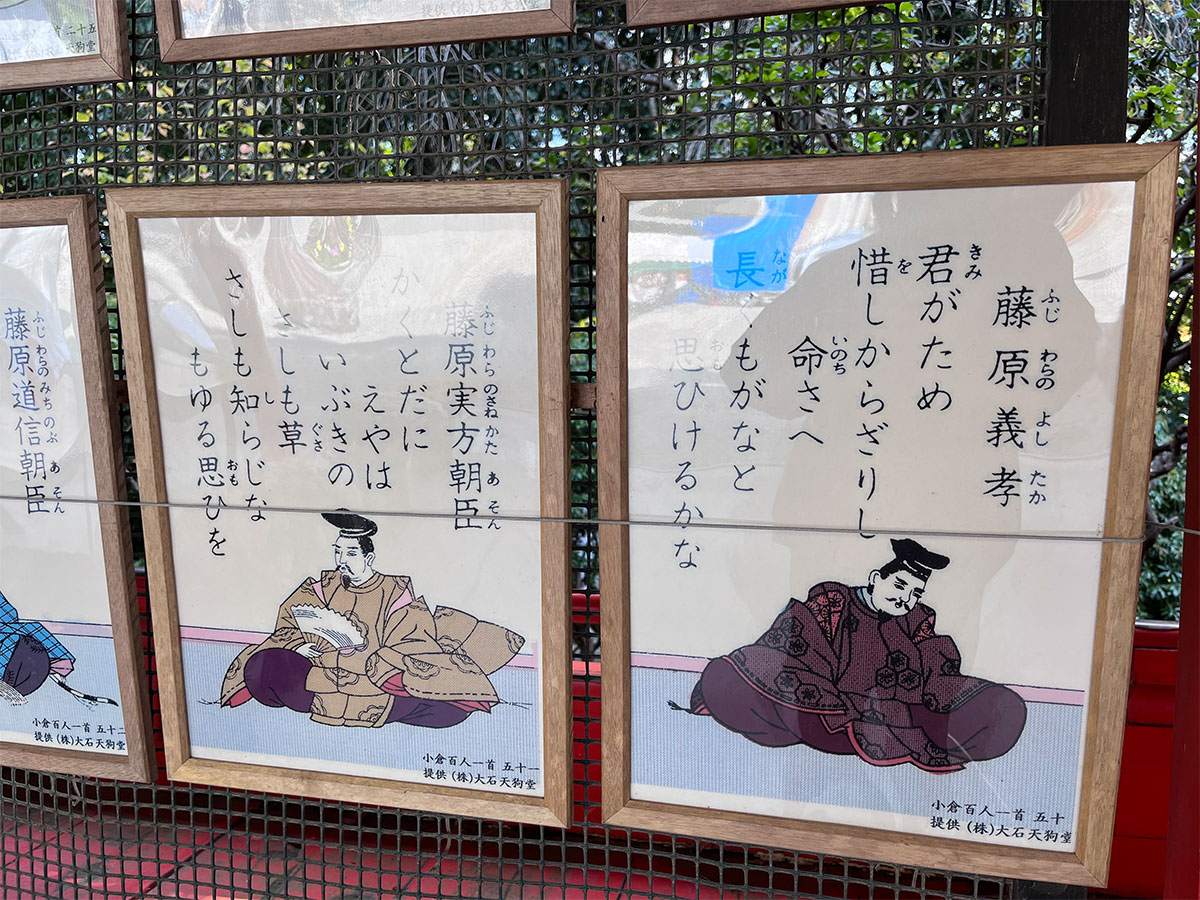 There was a poster that read, “The Holy Land of Karuta(かるたの聖地)”. The character in the lower left of this photo is said to be “Otsu Hikaru kun”.

Omi Jingu Shrine has another unusual thing. Here it is. 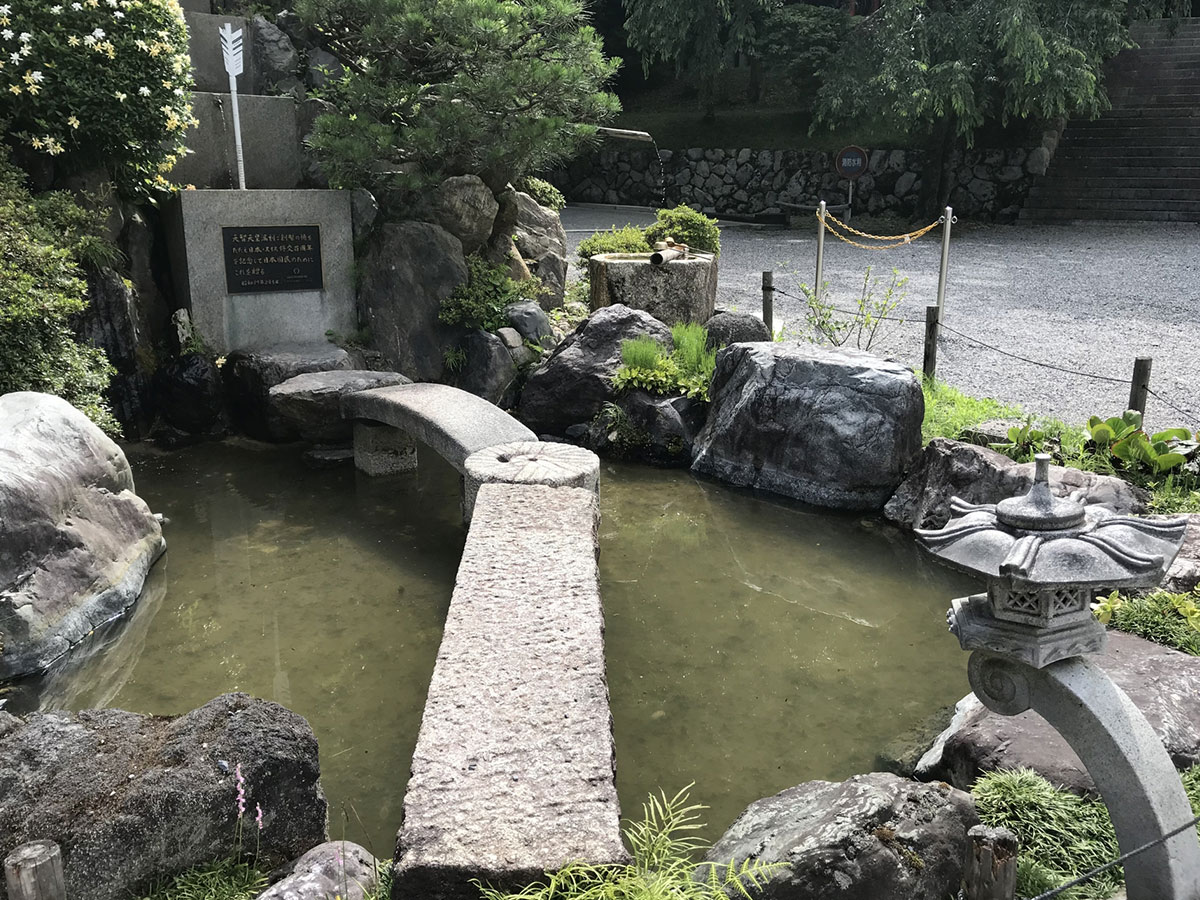 Omi Jingu Shrine has a replica of an old clock. There is also the clock museum.

Water flows down slowly into a staircase of tanks, and the time is measured by the amount of water that accumulates at the bottom of the staircase.

I felt the history.

Cherry blossoms are beautiful at Omi Jingu Shrine in spring!

Omi Jingu Shrine is said to have many attractions in springtime as well. The cherry blossoms are in full bloom and the scenery is very beautiful. 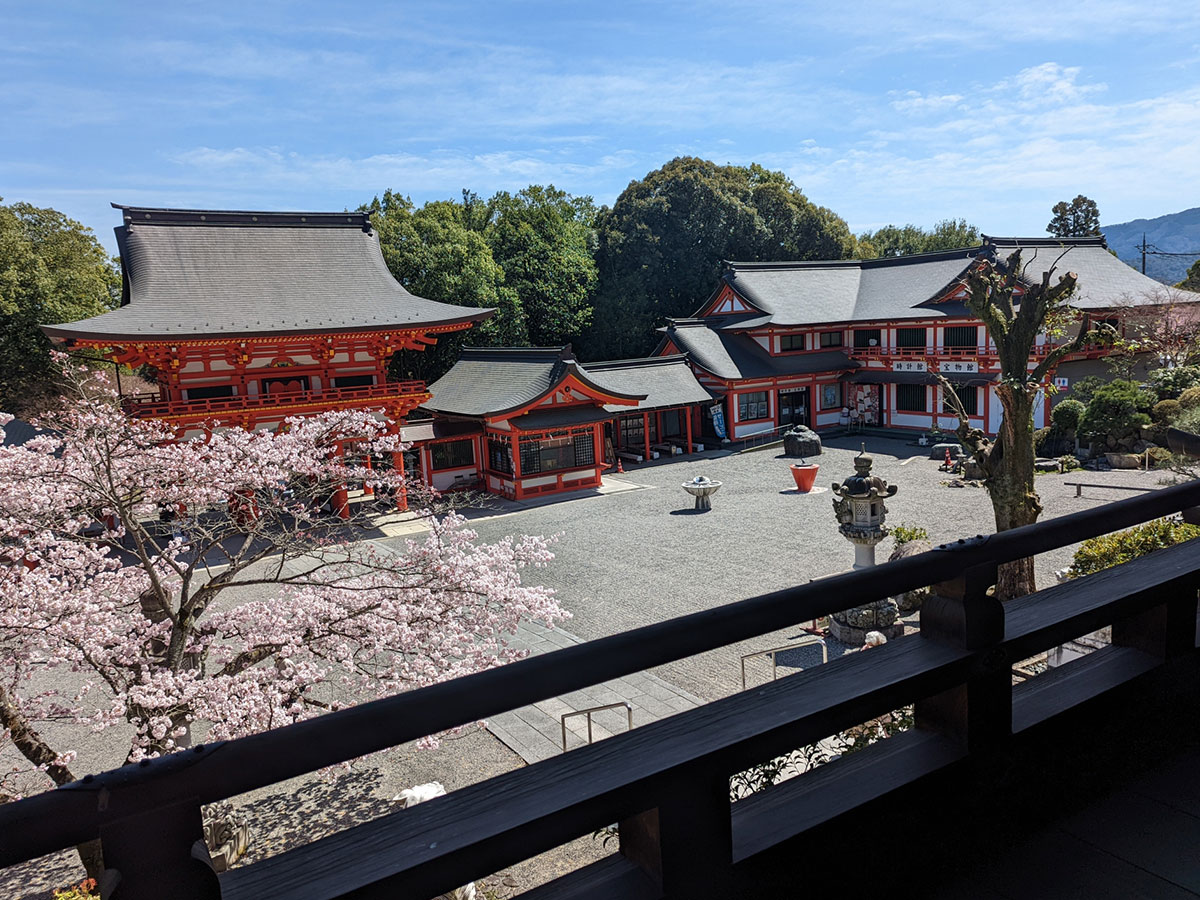 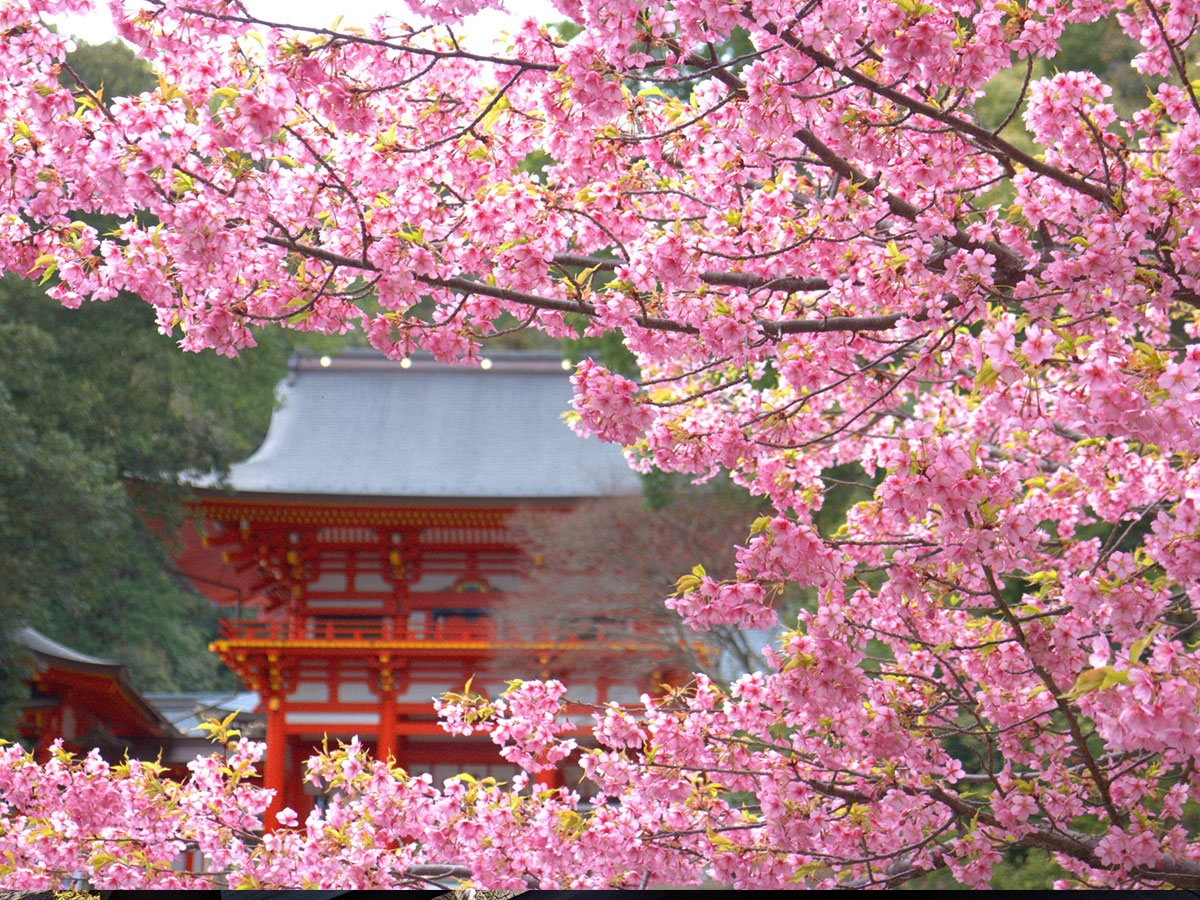 The vermilion-lacquered gate and pink cherry blossoms are vivid and beautiful.

I went in the fall and will try again in the spring. 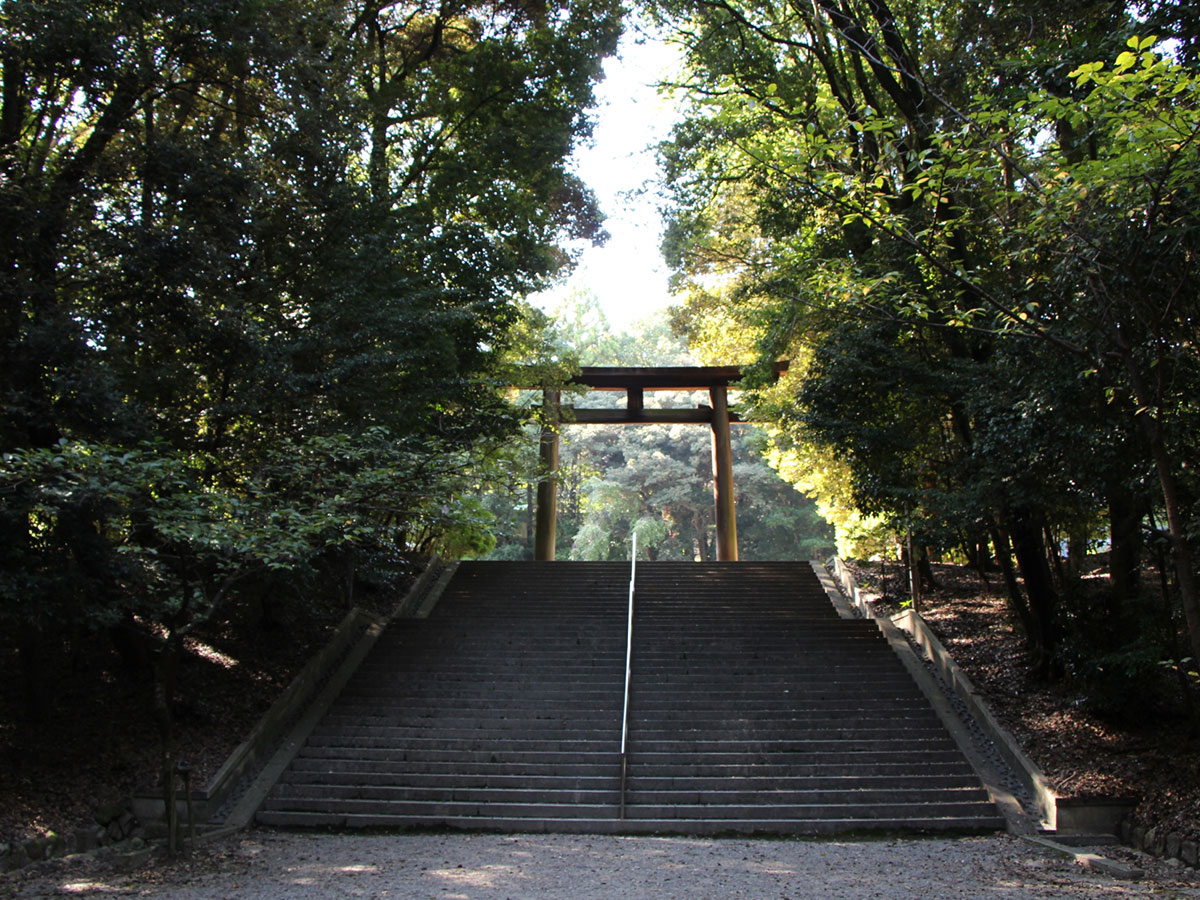 Torii gate at the top of the stairs. Surrounded by trees, it is very fantastic.

Kodawari Times
Shiga "Winter Landscape" in Japan
https://kodawari-times.net/seasons/shiga-winter
Hi, I'm AKI.In Japan, snow falls in many places in the winter. In areas rich in nature, it makes for a very beautiful snowscape!This time, I would like to introduce you to the beautiful winter scenery of the region called Shiga. 1.Mysterious torii gate floating in the lake, "Shirahige Shrine"Shirahige Shrine is one of the most famous tourist spots in Shiga.In winter, white snowflakes dance and mirages appear in the sky, making it very mysterious.Sometimes there's... 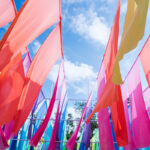 Biwako Hakodateyama – I went to a green season full of flowers.

Do you know about Shiga Prefecture in Japan? A region rich in nature, with a big lake!

Hi, I’m AKI. Today I’d like to introduce you to my hometown, Shiga Prefecture in Japan! ...

Knives made by Japanese craftsmen are sharp and have fans all over the world. Among them, have you e...

There is a station with dinosaurs in Japan. Fukui Station has a moving dinosaur monument that is a m...